In Victoria Gardens, London, outside the Palace of Westminster, stands a statue of six men: the Burghers of Calais. Unveiled a hundred years ago this summer, it is one of a dozen casts of Rodin’s original in Calais and commemorates a famous incident from the Hundred Years War, recorded by Jean Froissart in his Chronicles. 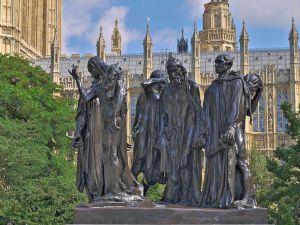 Froissart tells how the army of Edward III, king of England, had laid siege to Calais for almost a year. The French king had advanced to nearby Sangatte, then retreated. Peace efforts had failed. As supplies dwindled, six of Calais’ leading citizens – the so-called burghers or (in French) bourgeois – offered themselves as hostages in return for the lifting of the blockade.  The six (Eustache de Saint-Pierre, Jean d’Aire, Jacques de Wissant, Pierre de Wissant, Jean de Fiennes and André d’Ardre) left the town with its keys, expecting to go to their deaths. They were saved thanks to the intervention of Philippa of Hainault, queen of England, who begged the king to show mercy.

Rodin’s sculpture, unveiled in 1895, proved controversial. His burghers did not look heroic. He portrayed them as men might look after eleven months of siege – emaciated and drawn. This was not their moment of triumph, but a moment of doubt about their decision to face death. The commissioners of the work, Calais’ municipal council, were not entirely happy with Rodin’s innovative style, but that’s another story. (Read more about the artistic arguments here.)

Reading these past weeks about the desperate attempts of migrants in Calais to reach the UK reminded me of Rodin’s statue and Froissart’s story. Froissart’s story, because at its heart is something that has been badly lacking from most of the political debate on Calais and the ‘migrant crisis’ – mercy. Other people have documented far better than I can the appalling conditions from which the migrants in Calais have fled, and in which they now live. But I have yet to hear a British politician say that mercy is what is needed in the face of such human desperation. It is a sad thing indeed when medieval queens seem to have a better humanitarian instinct than twenty-first century politicos.

And I think of Rodin’s statue, well, because it’s in the back garden of the Palace of Westminster. I bet most MPs have done a TV interview within yards of it. Did they ever stop to think about who those starving, almost skeletal people in the statue were? Or what happened to them? Perhaps if they did, they might be a little more inclined to show mercy to people who are desperate enough to risk death.